Not all images were able to load for printing. Please close the print window and try again.

The Pasha de Cartier collection has a wonderful background story involving the fabulously wealthy Pasha El Glaoui of Marrakech and his request to Louis Cartier to produce a gold waterproof watch with enough panache to accompany him on any of his countless social appointments. The only snag with this story is that the alleged 1932 model has never materialised (see below). Be that as it may, the one fact we can confirm is that Gerald Genta was the designer behind the Pasha collection of 1985. Faithful to Cartier‘s tradition of shaped cases, the Pasha plays with the geometry of a square inside a circle and is easy to recognise thanks to its cabochon-capped crown protector attached to a small chain. Among the 2022 releases was a surprising and not very publicised version that proved even more surprising in the dark. We take a closer look at this Pasha de Cartier Skeleton ADLC.

The Pasha, as we know it today, materialised in 1985 and was Cartier’s response to a luxury men’s sports watch. With plenty of dress watches and shaped cases, Cartier was missing a sporty, water-resistant model. It will come as no surprise that the design of this watch fell to the man of the hour, Gerald Genta. After all, as the man behind Audemars Piguet’s Royal Oak, the first luxury sports watch with integrated bracelet in 1972, followed by the Patek Philippe Nautilus, the commission was right up his alley. Inspired by a 1942 waterproof model with a protective grid on the dial, the Pasha’s round case with a square minute track featured a distinctive cabochon protector over the crown attached to a small chain and elegant Louis Cartier Vendome lugs. Water-resistant to 100m, the 1985 Pasha was large for its day (38mm) and appeared in countless iterations until it silently went out of production in around 2011. Refreshed in 2020, the Pasha is enjoying a new lease of life with a well-assorted range of watches for men and women alike. 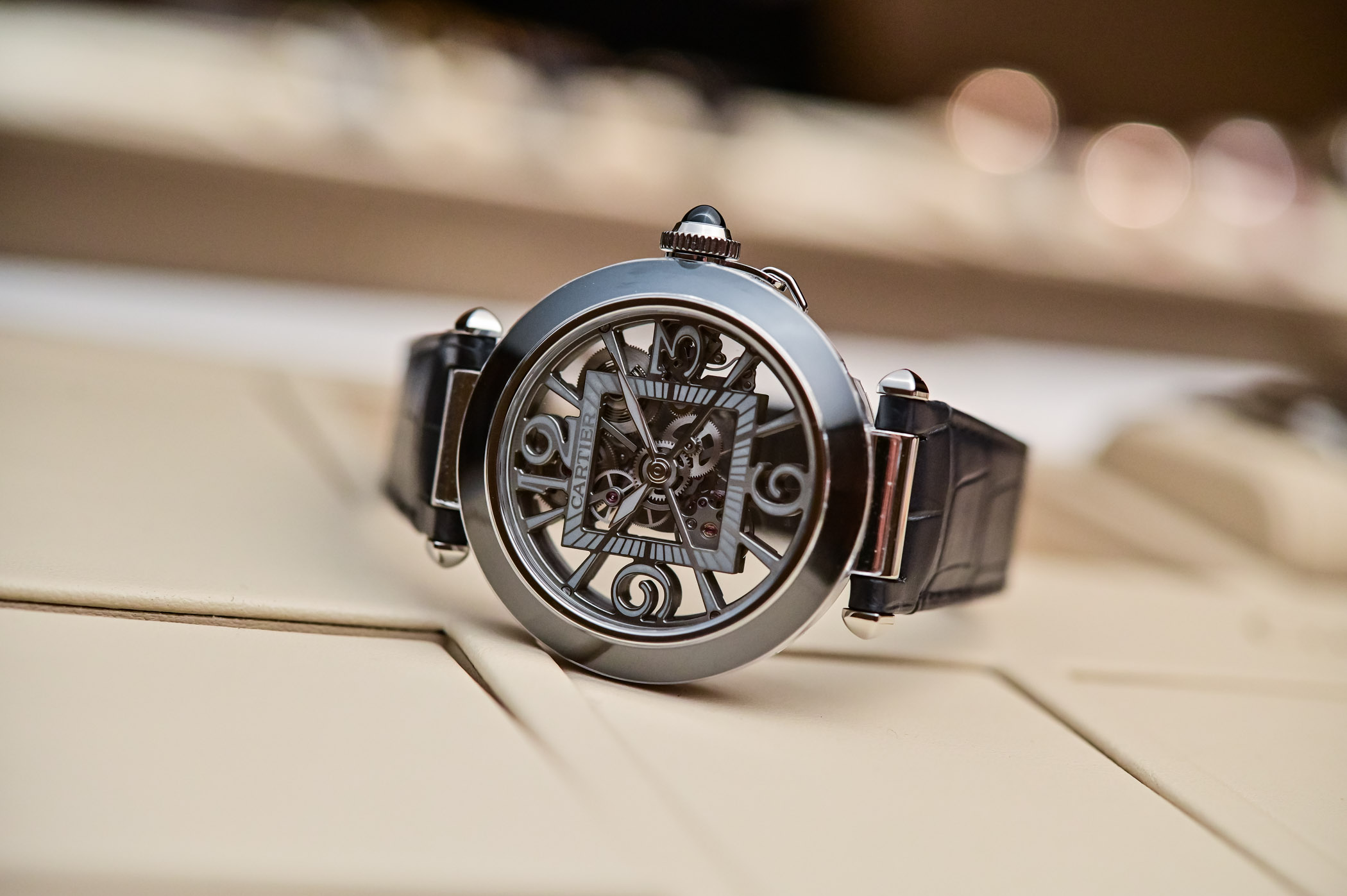 MAKING A CASE FOR THE PASHA OF MARRAKECH

The Pasha de Cartier appeared as a fully fledged watch collection in 1985. Supposedly inspired by the lines of the original 1932 model made by Louis Cartier for the Pasha de Marrakech, Gerald Genta revived the Pasha in the 1980s respecting its quirky design details. However, there is one thing missing: the original watch.

Although many watch writers do not buy the exotic origin story behind the creation of the Pasha watch, that it was commissioned by the extremely wealthy Pasha of Marrakech as an elegant waterproof wristwatch in the early 1930s, there are some facts that might substantiate its existence. After all, Louis Cartier was accustomed to requests for bespoke models from wealthy clients and its very peculiarity points in that direction. 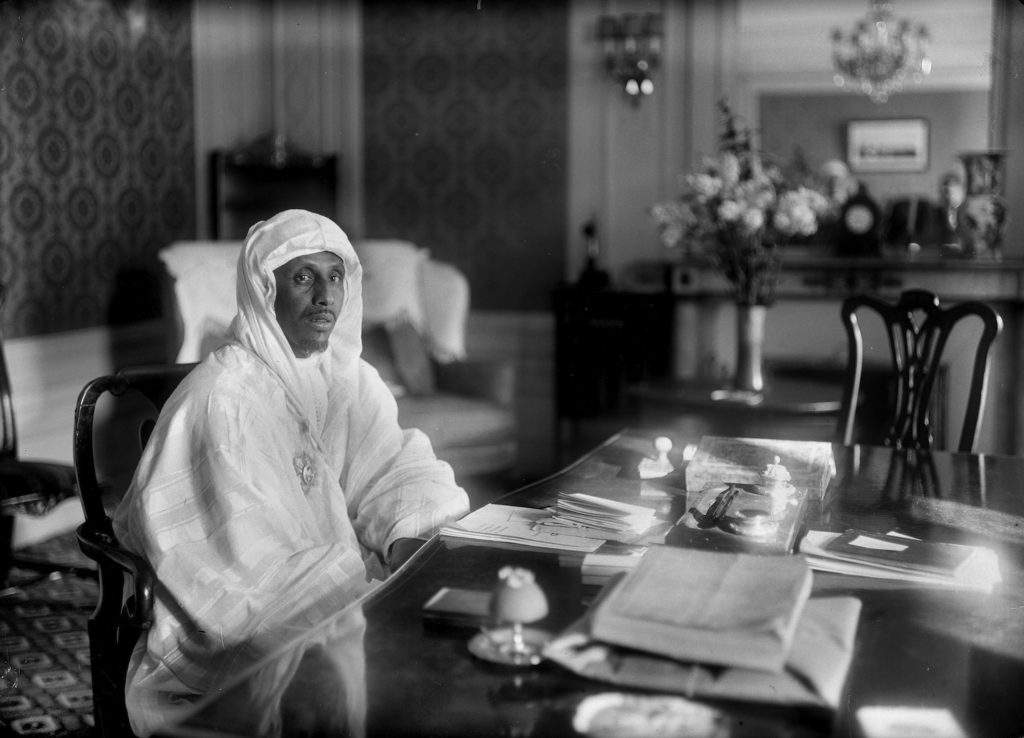 Thami El Glaoui (1879-1956), the Pasha of Marrakech, a.k.a Lord of the Atlas, the Black Sultan and the Gazelle of the Sun, has gone down as a traitor in Moroccan history for having sided with the French colonisers and helped overthrow Sultan Mohammed V. El Glaoui amassed great wealth (almond, saffron, olive, mining etc.) during his lifetime and was renowned for his extravagant lifestyle and famous friends, entertaining Winston Churchill and even Charlie Chaplin in his lavish palace, Dar El Glaoui. His fascination with Western culture even secured him an invitation to Queen Elizabeth II’s coronation, although she didn’t accept his lavish gifts. Awarded all sorts of distinctions by the French government, El Glaoui was a true Francophile and enamoured of all things French. 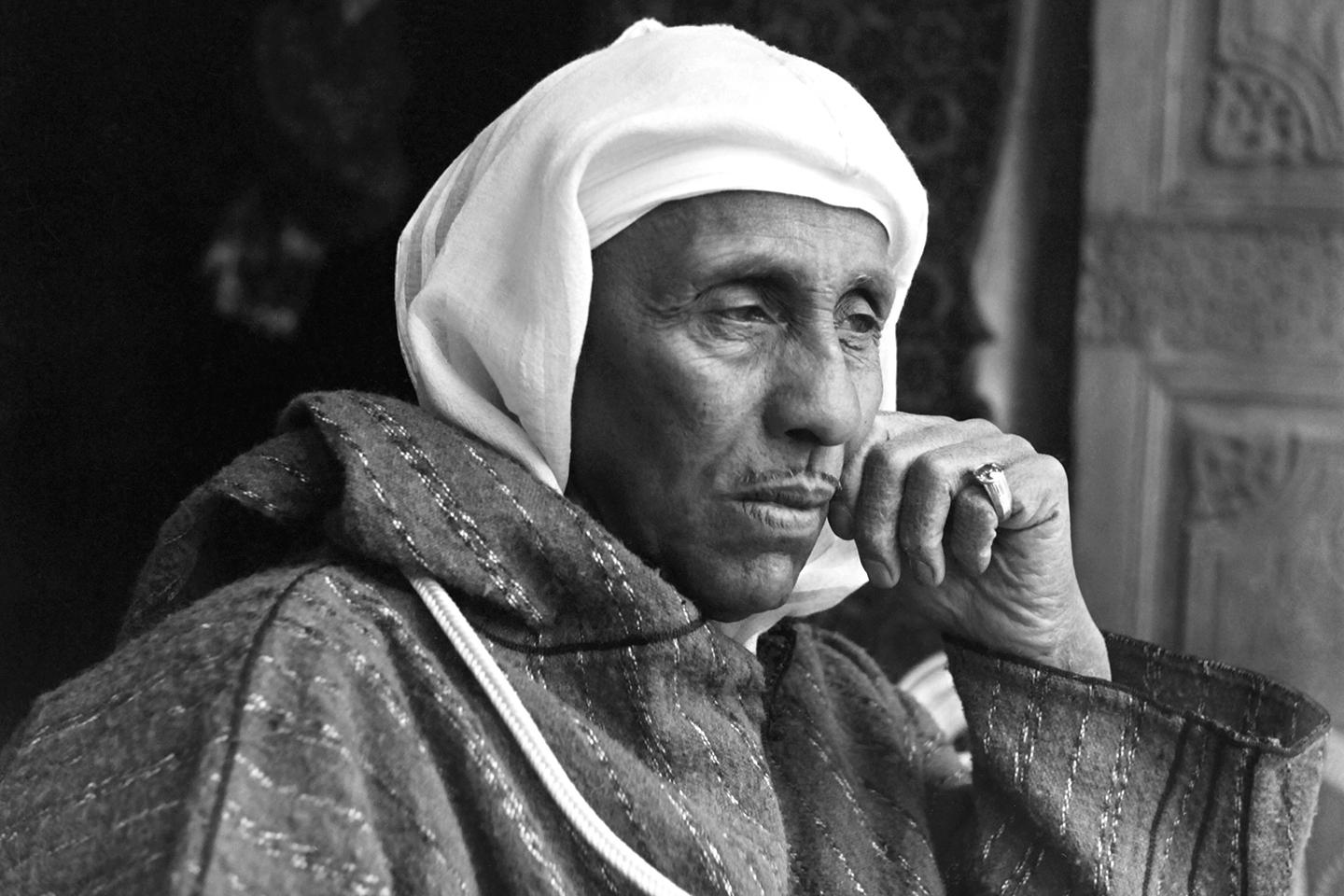 On one of his many Parisian shopping trips, El Glaoui might well have met with Louis Cartier and asked him for a very special watch: a watch that would look smart enough for his countless social appointments and grandiose living but that could withstand a dip in the pool. If the story is to be believed, this model marks the first waterproof watch for Cartier. Not the first waterproof watch on the market, Rolex had secured that primacy with its 1926 Oyster, but certainly the first watertight watch for the French brand. In 1932, the Pasha got his watch. Reflecting the sleek, smooth silhouettes of the prevailing Art Deco style, the one-off solid gold Pasha is said to have had a round case with a thick bezel, a contrasting square railway minute track in the centre, large Arabic numerals, a protective grille over the dial and a curious screw-down cap protecting the crown with a little chain attached to it so it wouldn’t get lost.

Lurking among the more conventional Pasha models of 2022, like the fun Pasha de Cartier Grille with its removable grill, was this Pasha de Cartier Skeleton ADLC. There is another skeletonised model in the collection, but it has a brightly polished case and doesn’t perform the magical blue glow-in-the-dark routine of this specific model. Although it is also made in stainless steel, it has a black brushed ADLC bezel that makes it stand out from its siblings with its darker, more technical, contemporary personality. 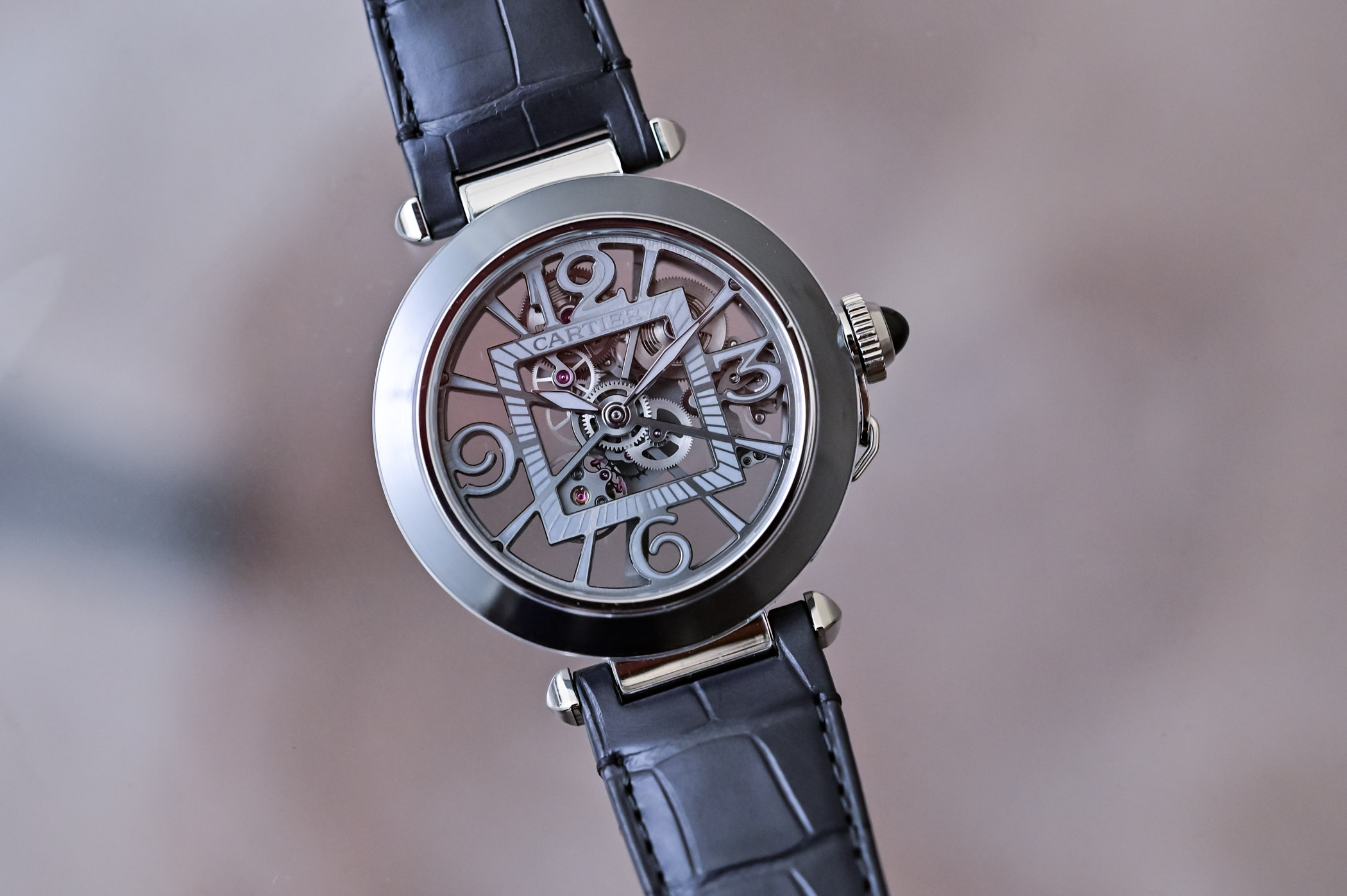 As a Pasha, the round case – 41mm in diameter and 10.45mm in height – features the signature sapphire cabochon-tipped crown protector and chain and the classic Vendome-style bars with rounded Clous de Paris tips designed and patented by Louis Cartier in 1934. The wide sloping bezel is brushed like the case, contrasting with the polished Clous de Paris lug tips, the crown, chain and clasp. Like other Pasha models, the chained crown protector conceals a small plate that can be engraved. 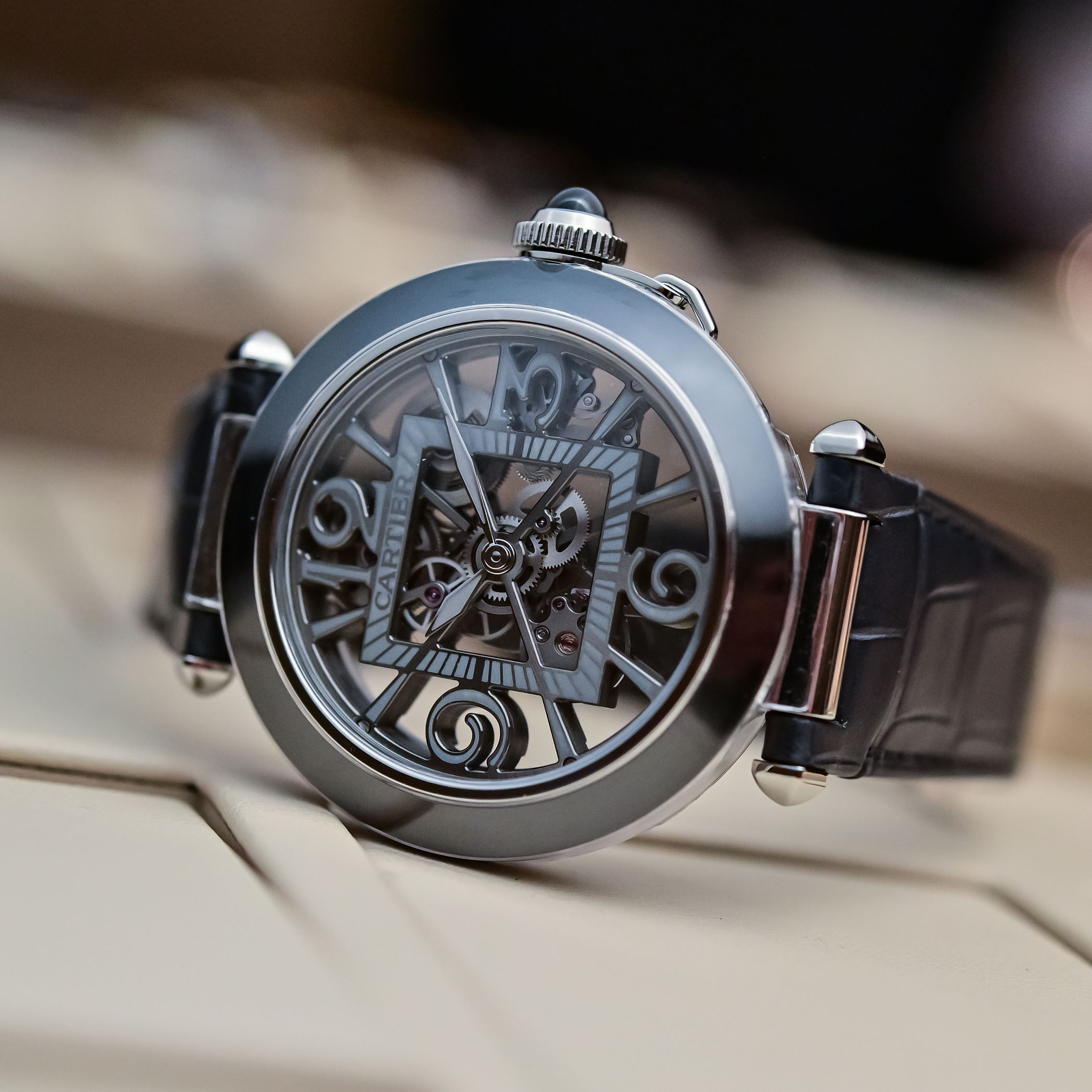 Like Gerald Genta’s original design for the Pasha de Cartier in 1985, the four large Arabic numerals go against Cartier’s longstanding tradition of Roman numerals and are carved into the main-plate. Picked out in an Art Deco font, the large Arabic numerals at 12, 3, 6 and 9 o’clock are indicated by Cartier’s signature sword-shaped hour and minute hands. Contrasting with the thick round sloping bezel is the square track for the minutes suspended in the centre of the dial, also forming part of the bridges. 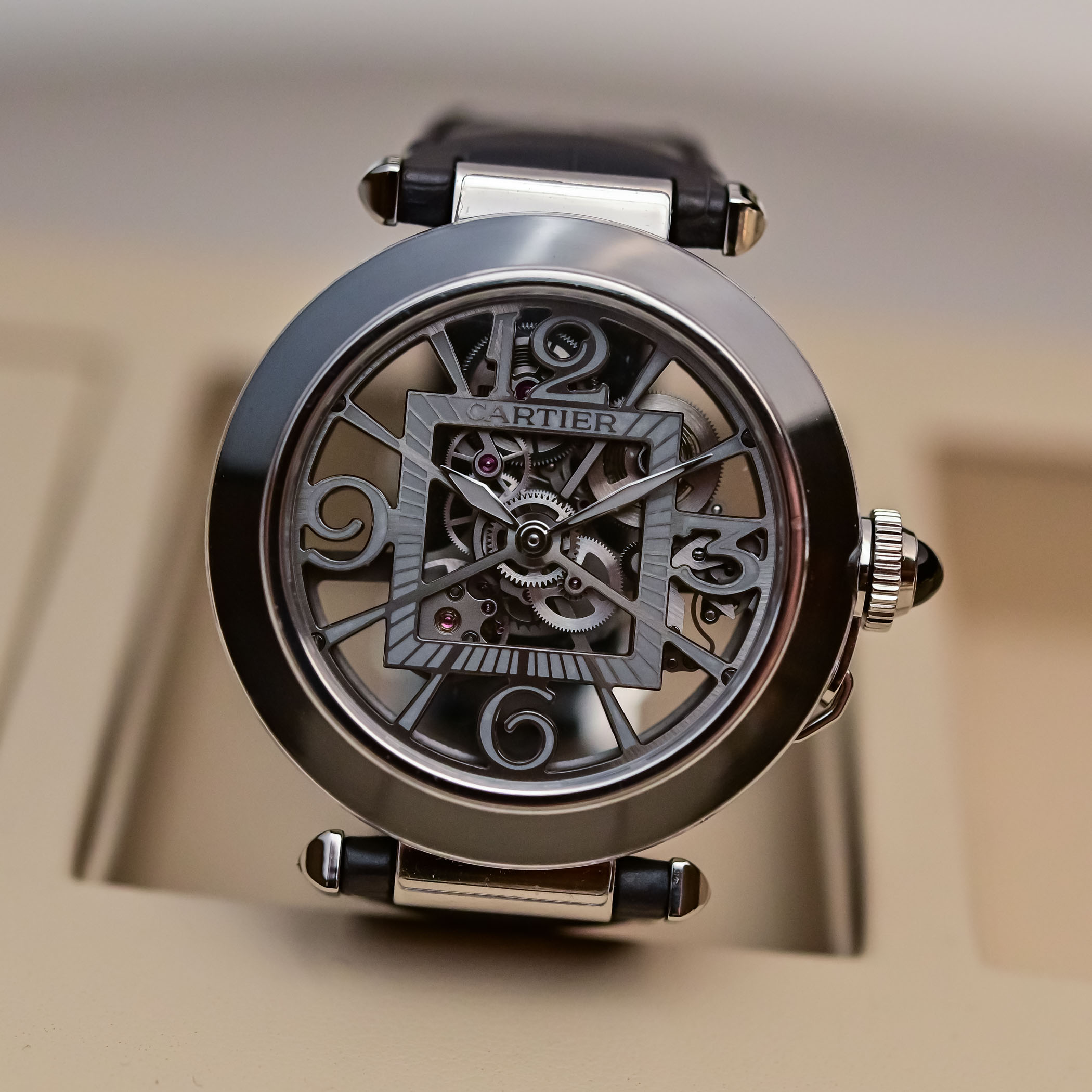 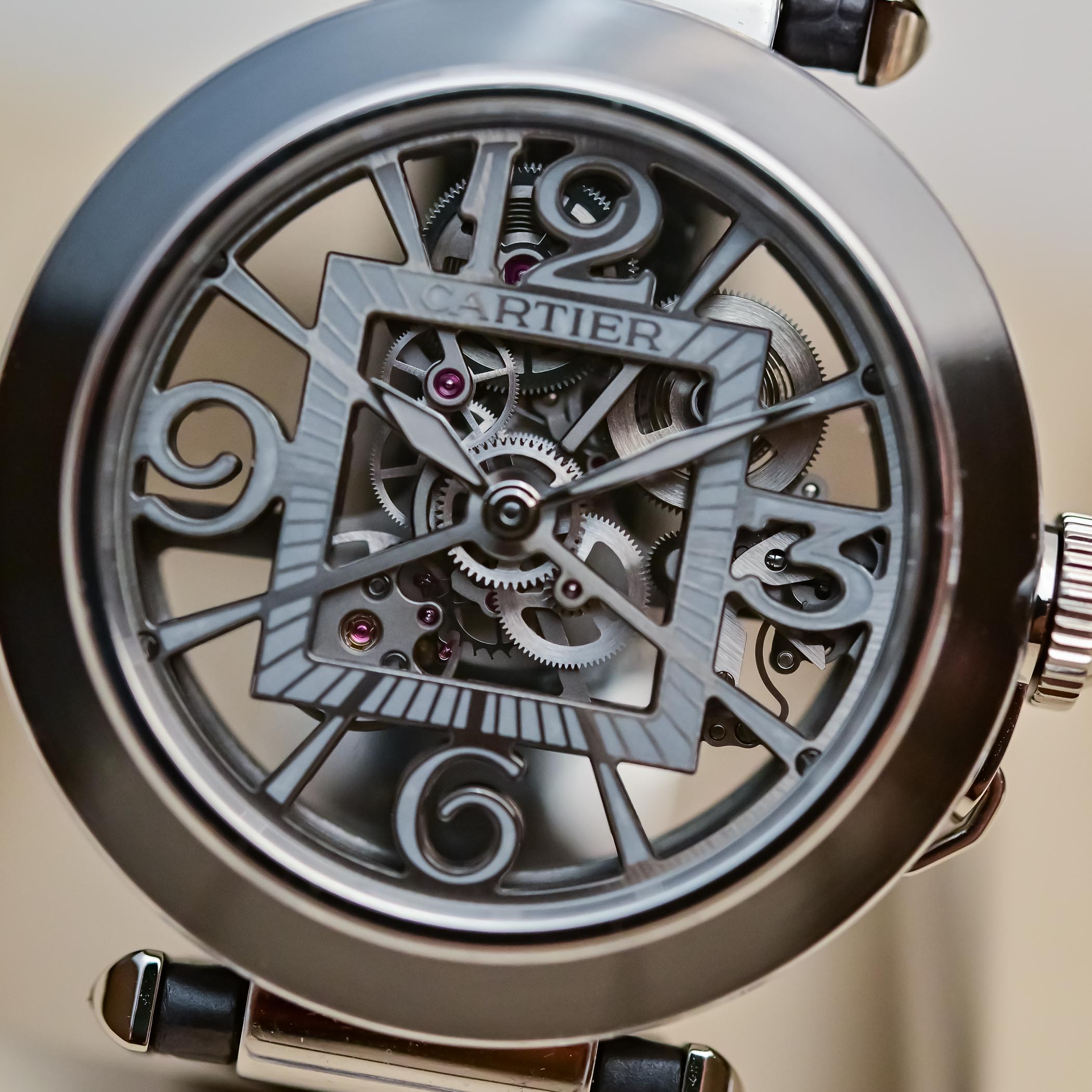 Genta’s square-inside-a-circle concept is even more pronounced on this skeletonised model and glows with light blue Super-LumiNova. Applied to the four Arabic numerals, the indices, the square minute track and the hands, the Pasha Skeleton puts on an impressive show in the dark. 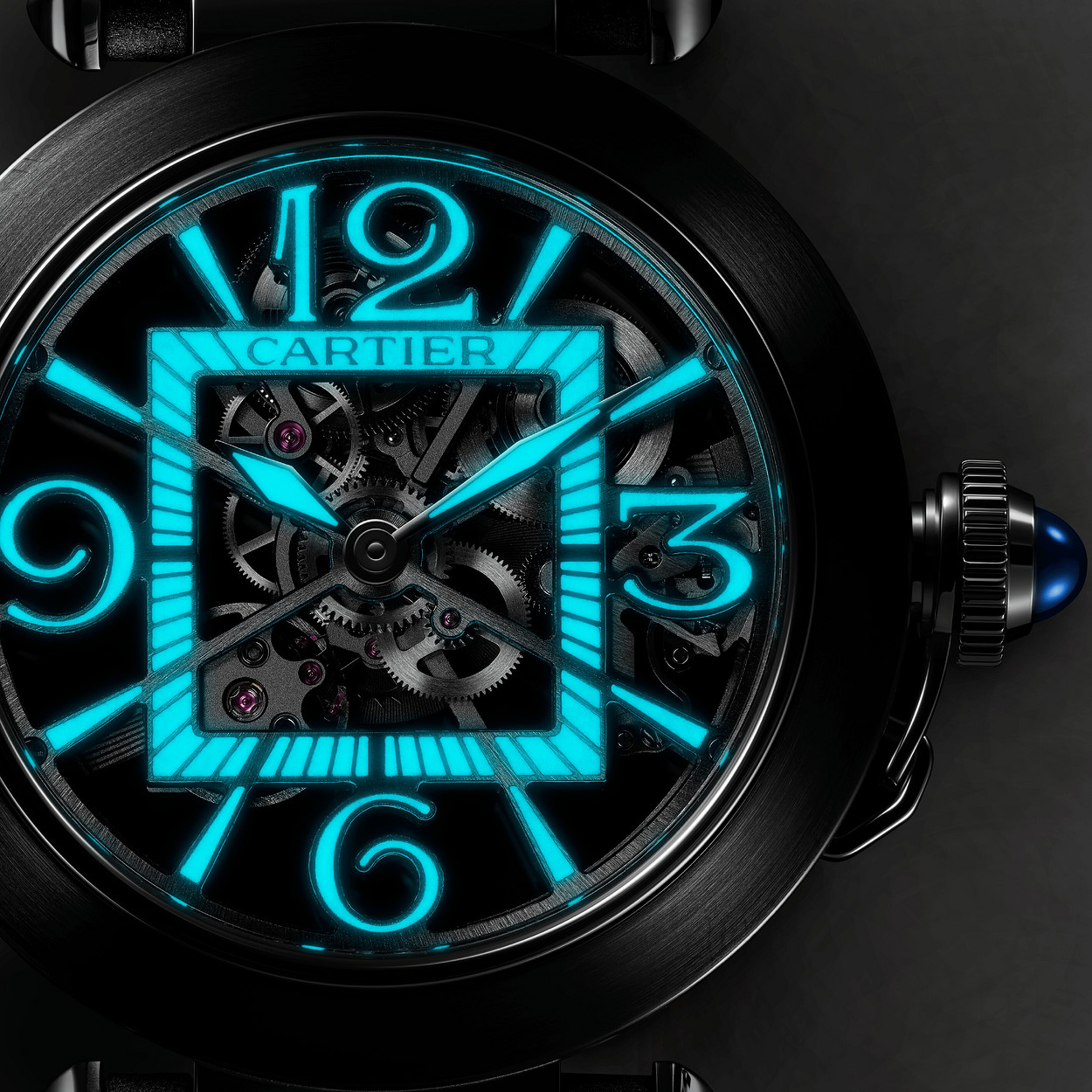 Allowing light to flood the case from the front and back, the movement seems to float in space and features brushed finishings to match the suspended elements over the dial.

Turning the watch over reveals the large skeletonised rotor and bridges that echo the shape of the square minute track. Fitted with automatic calibre 9624MC, the skeletonised version of the 1904MC, the movement has double barrels for a 48-hour power reserve and beats at 28,800vph. 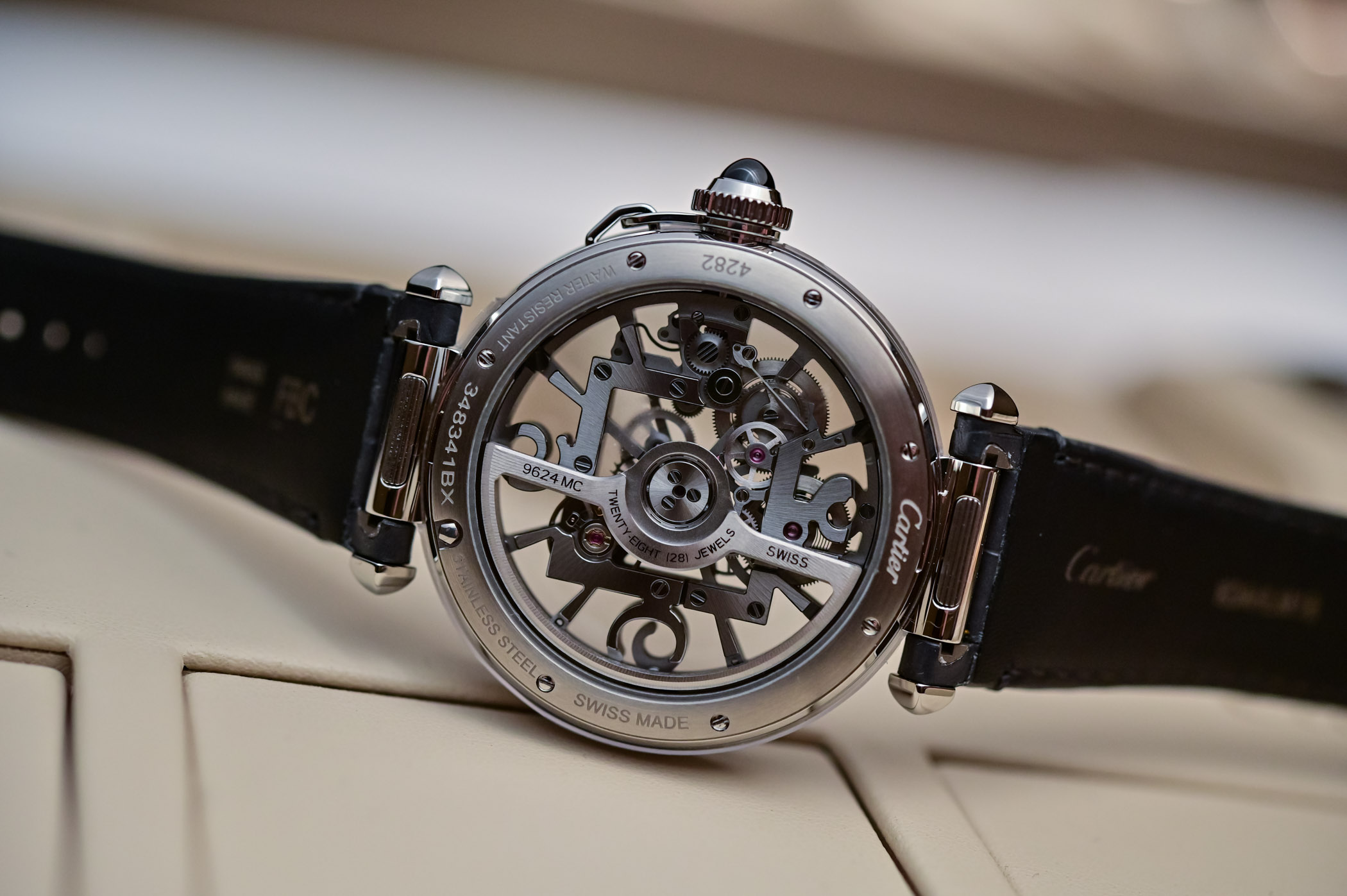 Pasha models from 2020 forward all feature an invisible mechanism allowing you to change the bracelet or strap with Cartier’s QuickSwitch system. This Pasha is delivered with two straps, one in black and the other in dark grey alligator, which can be changed using the button on the reverse side of the lugs. One simple click requiring no tools releases the bracelet in seconds. 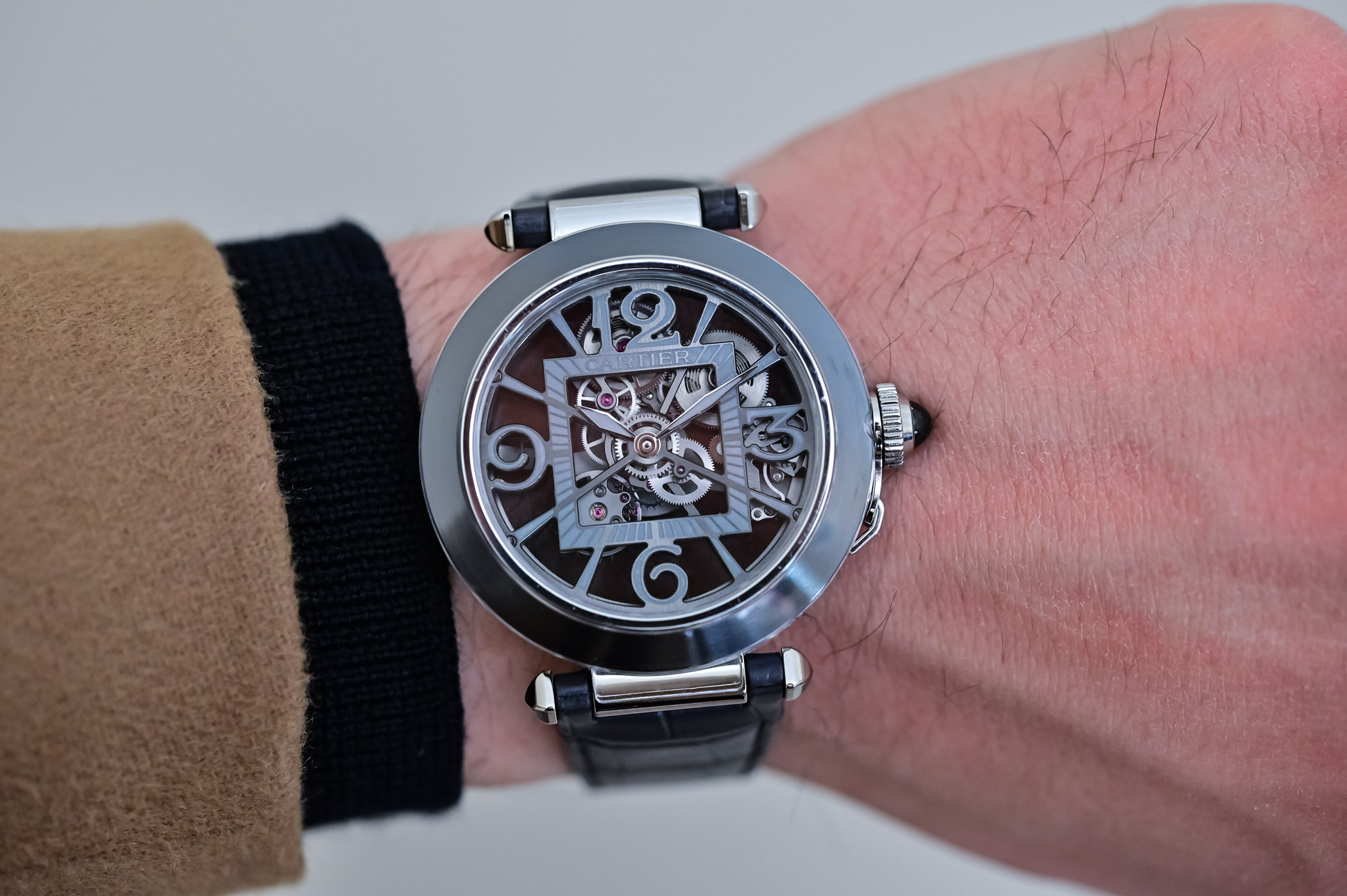 The Pasha de Cartier Skeleton ADLC (ref. CRWHPA0017) forms part of the regular collection and retails for EUR 28,200 or CHF 26,400 (incl. tax). For more information and online orders, don’t hesitate to get in touch with cartier.com.

Opinion A True Diver or A Daily-Beater With A Sporty Edge? A…