RGM was founded in 1992 by American watchmaker Roland G. Murphy in Pennsylvania. The company is the only vertically integrated manufacture in the United States that designs and produces unique movements, dials, hands, etc. in-house. The brand's limited production of high-end luxury watches are competitive with Swiss and European counterparts, and feature complex guilloché dials, hand finished movements and advanced complications. Roland's watchmaking days started in the early 1980s when he worked in the cabinet making section of a clock company before traveling to Switzerland in 1986 to study with The Watchmakers of Switzerland Training and Educational Program (WOSTEP). After working in product development for the Hamilton Watch Co., he started his own brand. RGM initially relied on outsourced Swiss movements, but the Calibre 801 debuted in 2008 as the first in-house development with several additional calibres to follow. Modern technology blends with old world techniques as antique, hand-operated machinery has been employed to preserve traditional craftsmanship in the company's atelier.

The Calibre 801 was inspired by America’s watchmaking history, a subject of great interest to Roland. For example, the movement’s bridges are reminiscent of the Keystone Howard Watch Company’s “Edward Howard” model (a flagship at the time) and the winding click is inspired by the Illinois Watch Company’s “Illini” model. And deep polished winding wheels have a similar finish to those of the Illinois “Bunn Special.” This hand-wound calibre has 19 jewels, beats at 18,000vph (2.5Hz) and is hand finished with Cote de Geneve and perlage (and guillochè on some models). Wolf’s tooth winding wheels are also an option.

In 2010, the brand’s second in-house movement debuted, the Calibre MM2 (or Pennsylvania Tourbillon). These are the first serially produced American Tourbillon movements ever made and represent the brand’s flaghip models. The tourbillon cage is also one of the largest for a 43.5mm watch case. The Calibre MM2 is comprised of German silver and has 19 jewels, beats at 18,000vph (2.5Hz) with 18K gold plaques, guillochè on the main plate, Cote de Geneve, perlage & anglage. The Caliber 20 launched in 2012 to commemorate the brand’s 20th anniversary. This is RGM’s first tonneau-shaped movement and again made from German silver, which is hand-finished and left unplated. Like the other two calibres, this hand-wound movement has 19 Jewels and beats at 18,000vph with Cote de Geneve, perlage and anglage. The movement features a unique motor barrel system that reduces wear and friction, and it’s the first watch to have one in over 50 years. A motor barrel is recognizable by the ratchet-wheel escutcheon having three small screws instead of a large central screw. These in-house creations and variants like the PS-801-Skeleton (skeletonized Calibre 801) solidify the young American brand as a bona fide player in Haute Horology.

RGM also offers one-of-a-kind custom watches, which is very rare in the industry. Customization can range from tweaks to current designs (engraved rotor or case, or modified dial) to fully bespoke watches designed and built in-house in collaboration with customers. In addition, the company offers watch repair and restoration of both modern and antique pieces. Watch companies, museums and noted collectors turn to RGM for these services, which very few in North America provide. As a vertically integrated manufacture, the brand can also produce parts in-house for restoration/repair that are no longer attainable. Although renowned brands like Hamilton, Waltham and Ingersoll have either moved overseas or shut down entirely, RGM proves that traditional, in-house luxury watchmaking is still alive and well in America. 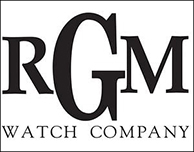 1986
Roland G. Murphy travels to Switzerland to study with The Watchmakers of Switzerland Training and Educational Program (WOSTEP)
1992
Company founded by Roland G. Murphy in Pennsylvania
2008
The Calibre 801 debuts as the first in-house movement
2010
The Pennsylvania Tourbillon with in-house Calibre MM2 launches
2012
The Calibre 20 launches as the third in-house movement and first tonneau shaped one, named for the company's 20th anniversary
2019
The PS-801-Skeleton launches with a skeletonized Calibre 801 variant